We did it! Sing50 is now offering “honoraria” to their “community performers”! 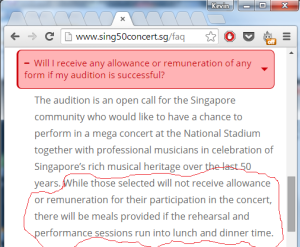 Congratulations, all you online netizens, denizens, and Citizens of the World! Sing50, who were initially not going to pay the majority of its performers, will now offer honoraria to their “community performers”! (See this post and this clarification for more background information.) 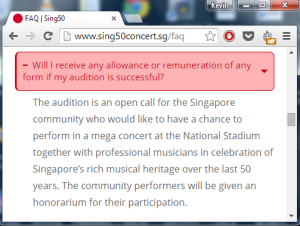 Of course, labeling the payment as an “honorarium” is a sneaky way of saying that Sing50 still treats its performers as volunteers. (Honorarium: A payment given for professional services that are rendered nominally without charge.)

There is a horrible, toxic culture of not paying musicians in Singapore. When I played in Perth, festival organizers were thoroughly apologetic that they could only pay my band a small amount (only in the hundreds of dollars). When I played in Copenhagen, festival organizers were similarly apologetic that they couldn’t pay me anything, but they gave me tickets that I could sell (I would keep all the money from any of those ticket sales). There is an understanding in these cities that musicians should be paid, and that it is a shameful, shameful thing when musicians are not paid.

In Singapore, people act as if musicians should be grateful for the opportunity to perform.

Of course, this isn’t the only problem that musicians face in Singapore. This may sound a little strange, but if we want Singapore’s music industry to thrive, we need more social safety nets, and we need to be more forgiving of “failures” in our local system.

When people dare to fail, they often succeed. We need to have some kind of safety net for entrepreneurs and artists who try for their entire lives to accomplish something, but who eventually end up in a financially dire situations. Yes, a welfare system is tricky to create and to maintain — but I don’t think it’s an accident that countries with solid welfare systems (the Nordic countries, US, and UK come to mind) also have very healthy music industries.

It is absolutely ridiculous that being in the “Normal (Academic)” or “Normal (Technical)” streams in secondary school is seen as a major life failure. These are teenagers we’re talking about, with their entire adult lives ahead of them. Why do we need to condemn these children as failures when so many of them have the potential to excel in other fields beyond the academic?

Everything is connected, and our local music scene is inextricably connected to our local politics.

Everything is connected, and this post is connected to this post, where you will be able to find Mr Seah’s (Kevin Ghosty’s) music 😉